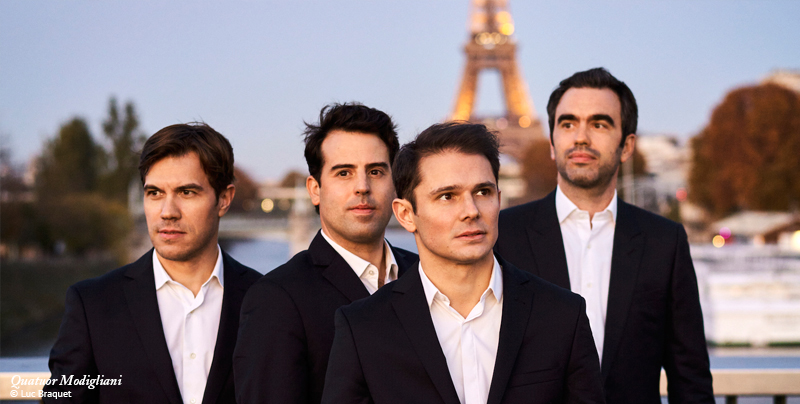 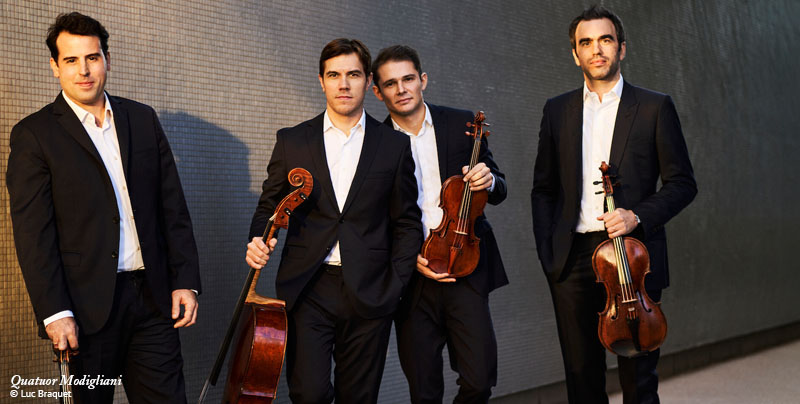 The Paris based Quatuor Modigliani, which celebrates its 15th anniversary this season, is a regular guest of the world’s top venues and finest String Quartet & Chamber Music series.

In the current and upcoming seasons, the quartet will be touring in the US, South America, Japan, and extensively throughout most of Europe. Highlights include the Wigmore Hall in London, the Paris Auditorium du Musée du Louvre, The Morgan Library & Museum New York, the Cologne Philharmonie, the Brussel Flagey, Pierre Boulez Saal in Berlin, the Munich Prinzregententheater, Tokyo’s Oji Hall and festivals such as Salzburg Festspiele, Schubertiade Schwarzenberg, Menuhin Festival Gstaad and Festspiele Mecklenburg-Vorpommern. In 2017 the Quatuor Modigliani was first the String Quartet to perform in the main Hall of the Hamburgs Elbphilharmonie.

In 2014, the Modigliani Quartet became Artistic Directors of the Rencontres Musicales d’Evian, a festival created in 1976 by Antoine Riboud and made famous through its former legendary artistic director Mstislav Rostropovich, after a pause of thirteen years. The joint efforts of the Evian Resort and the Modigliani Quartet achieved immediate success and the festival has now become again one of Europe’s major and most publicized Summer musical events.

The quartet has been recording for the Mirare label since 2008 and has released 8 CDs, all awarded prizes and receiving international critical acclaim. The next release will be „Carnet de voyages”. The Modigliani Quartet has built true artistic friendships and are regularly play with other musicians such as Nicholas Angelich, Daniel Müller-Schott, Yefim Bronfman, Sabine Meyer, Beatrice Rana and Renaud Capuçon.

After fifteen years of building up their own sound and profile, the Modigliani Quartet is now happy to pass their experience to the next generation. In 2016 they created the Atelier within the Festival in Evian and will be holding a series of masterclasses at the Conservatoire National Supérieur de Musique de Paris beginning in November 2017.

Thanks to the generosity and support of private sponsors, the Modigliani quartet plays on four outstanding Italian instruments :

The Modigliani Quartet also thanks the SPEDIDAM for its help.