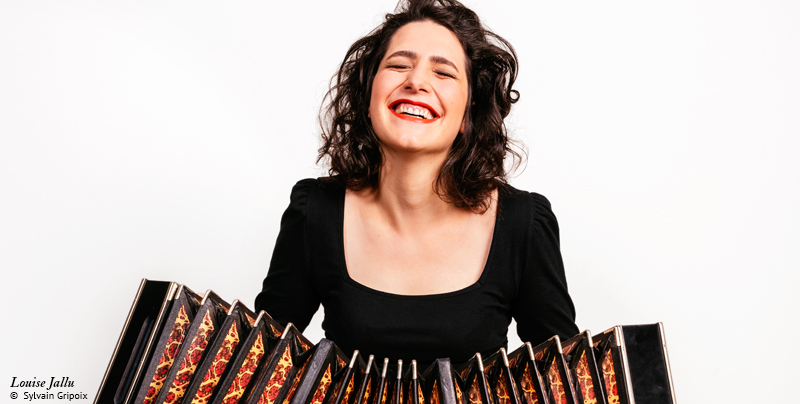 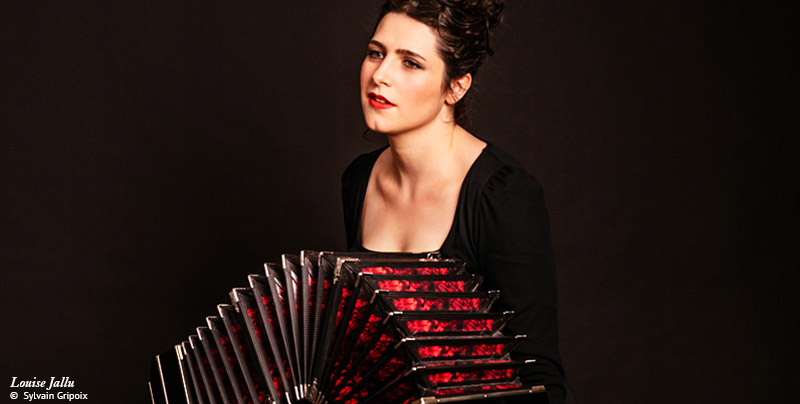 With over twenty years of squeezing out music on the bandoneon, but still quite young,Louise Jallu can legitimately be considered an accomplished musician. Granted, shebegan playing at the age of five and attended the highly-reputed music conservatory inher home town of Gennevilliers, France. She grew up in a family of music lovers wholistened to Monk, Bartók, and Piazzolla. The conservatory, founded by Bernard Cavanna,kindled her thirst and curiosity for the varied world of music. Plowing the rich soil of tangoturned passion into profession. During her years of apprenticeship, she benefited from lessonsfrom great peers, musicians known as the finest experts. This included the likes of CésarStroscio and Juan José Mosalini who grounded her in the fundamentals, leading her to crafther own sound within the cenacle of tango. Knowing its history and mastering theinstrument, she has eschewed the panoply of tools of any mere copyist.Moved by a gift of ubiquity, she cultivated her urge to experiment all the whileresolutely anchoring herself in a long tradition. This is how Louise Jallu graduallyrefined her fingering technique, sharpened her compositional skills, and affirmed herexpressiveness both in instrumental performance and in musical composition. Despite havinghad many mentors, musicians such as Anibal Troilo, Astor Piazzolla, Máximo Mori,and Dino Saluzzi, the young woman’s own personality shines bright and unique in this milieulong known for its machismo. Times are changing, and we can hear it.Before she had even reached legal age, music diploma in hand along with second prizetrophy from the solo bandoneon category of the International Accordion Competitionin Klingenthal, Germany, Louise was busy creating her own ensemble, theLouise Jallu Quartet. Meanwhile, she continued playing in all sorts of other musicalcollaborations, such as with the Greek singer Katerina Fotinaki, with Sanseverino, withjazz musicians like Claude Barthélémy, Claude Tchamitchian, and let’s not forget theArgentine aesthete Tomás Gubitsch.She invited these musicians to join her ambitious project, Francesita, a double albumthat would reveal her to a broader audience. In forging arrangements of EnriqueDelfino’s tangos, she aimed to evoke the women who became victims of the sex trade in thebrothels of Buenos Aires in the 1920s. Whether playing solo, in quartet, or with the likesof the Orchestre National de Bretagne (Sonatine Orchestra, by Bernard Cavanna), hercompositions reflect how faithful the bandoneonist remains to her course of action. It has set herfree from dogmas that tend to mire thought. She has just created Édition Bisonore tofoster composing for the bandoneon. She pours herself into the founding values ofthis All-World music framework, so as to reinvent it with accruedforce. Does not tangohave in its DNA this necessary penchant for the oblique that spurs us to the freest oftransgressions