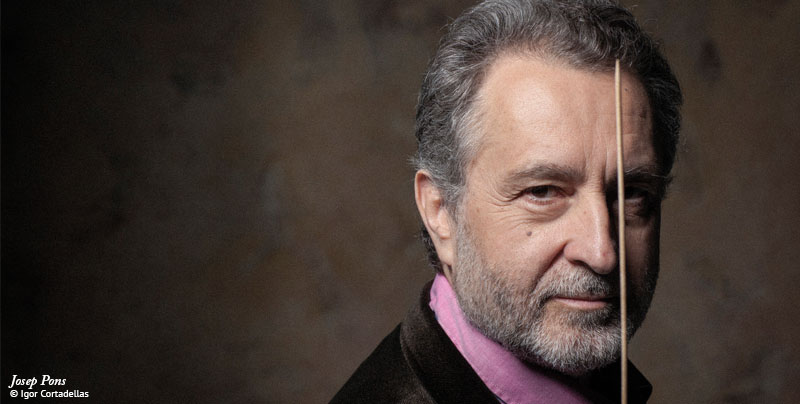 As Music Director of Gran Teatre del Liceu he conducts a number of productions in Barcelona each season, most recently Così fan tutte, Benvenuto Cellini, and Siegfried (as part of an ongoing cycle of Wagner’s Der Ring des Nibelungen). This season he will give opera performances of Le Nozze di Figaro, Elektra, Don Giovanni. He also holds the position of Honorary Conductor of the Orquesta Nacional de España having previously served as their Artistic Director for nine years during which he substantially raised their international profile. He was Music Director of Orquesta Ciudad de Granada between 1994-2004.

Josep Pons’ discography of over 50 CDs and DVDs, includes recordings of Falla and French repertoire regarded as benchmark interpretations and earning numerous awards. His recording of Noches en los jardines de España with Javier Perianes won a Choc de la Musique, ‘Melancolía’ with Patricia Petibon received a Gramophone Editor’s Choice, and his collaboration with Tomatito earned him a Latin Grammy. This season starts with an album release of Berio’s Sinfonia and Mahler/Berio’s 10 Frühe Lieder with BBC Symphony Orchestra and Matthias Goerne, which won Choc de la musique and Ffff Telerama awards and was among the 10 Best CD’s of the year of Presto Classical.

Josep Pons began his musical training at the prestigious Escolanía de Montserrat. The secular tradition and intense study of both Polyphony and contemporary music in this centre marked his later development both musically and intellectually. In 1999 he received the Spanish National Music Prize for his outstanding work on twentieth century music.

His latest album has been recorded by Hamnonia Mundi with Javier Perianes and the Orchestre de Paris with works by Ravel.

As a muscial director of the Gran Teatre del Liceu, he runs numerous productions in Barcelona, where this season has premiered a successful Turandot  commemorating the 20th anniversary of the Liceu and will lead the Lohengrin of Katharina Wagner next March.